Manchester United Football Club has filed a registration statement with the United States Securities and Exchange Commission (SEC) for the sale of up to $100m worth of securities. The Glazers had been pursuing a listing on the Singapore Exchange for the better part of a year but their focus seems to have shifted to the American market.  The club disclosed a planned listing on the New York Stock Exchange on July 3rd.

Part of the reason for the journey eastward is likely the better performance of the US markets relative to any of the alternatives.

This past year the London FTSE and Singapore EWS have fallen by about 5% and 9% respectively, whereas the S&P500 has gained 2%. Instability in the European and Asian regions is a likely impetus for the Glazers to move the offering to the (relatively) calmer United States.

But aside from the change of venue the most significant (and surprising) detail of the new listing is the reduced deal size. A year ago the Glazers were targeting an ambitious $1bn (£641m) raise to reduce United’s debt load.  A $100m (£64m) deal represents a 90% reduction from that original target and a far cry from the original pay down of the remaining $648m (£416m) debt that supporters were hoping for.

So with the offering unlikely to take a significant bite out of the long-term debt load what is the motivation? Simply put United needs cash. Now. The latest cash flow statement for the years 2009-2011 is below: 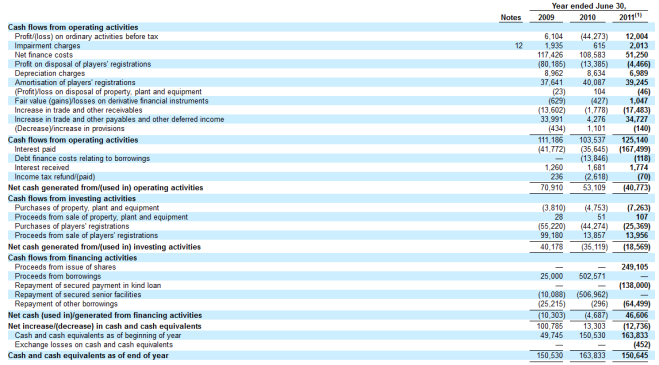 I will save a full-on analysis for another post, but a quick eyeball tells us that financing and transfer costs are sucking up most of the cash the club is producing. The repayment of the Payment-in-Kind (PIK) loans in 2011 was an extraordinary event which significantly drew down cash balances as accrued unpaid interest on the notes was settled. After a busy 2012 transfer window and some disappointing performances United’s cash balance has been further drained to a mere $39m (£25m) as of March 31, 2012.

If we look at the contractual obligations of the club in the next four years United has approximately $382m (£245m) worth of obligations to fulfill:

The Long-term debt obligations remains the largest category but Purchase obligations (deferred payments on players) is the second largest cost and is likely to increase as the club continues to invest in new players.

Bottom line? A $100m (£64m) raise is probably the bare minimum the club needs at this point to handle financing payments, investment in club facilities, and squad rebuilding while maintaining a comfortable cash cushion. Regarding the choice of a US listing, stability and prospect of market performance was a factor but the decision was also likely affected by the change in deal size. Unable to get a larger, single shot offering done in Asia the club is likely to try smaller offerings over a longer period of time, a strategy which requires access to the much deeper capital markets of the US.

…It is probably also to the Glazers liking that, should the need arise, their ownership in United can be cashed out in their home currency of USD.

GBPUSD Rate throughout this article = 1.5598