Soccer is about goals. The merits of a battling nil-nil draw can be argued, but entertaining goalless encounters are the exception and not the rule. No one lives to only deny goals (except maybe Olli), so here’s a review of goals in the Premier League from 2001-02 to 2011-12….as well as all the ridiculous goal scoring metaphors I can think of to liven it up.

TOTAL GOALS, HOME AND AWAY

Since 2001-02 EPL teams have increased their tallies of both Home and Away goals. Home goals have increased from 557 to 604 over the period. They peaked at 645 in the 2009-10 season helped along by Chelsea smashing in a massive 68 into the onion bag at Stamford Bridge.

Away goals reached an all-time high this season: 462 compared to 444 in 2001-02. This record finishing was fueled by the Manchester clubs with City (38) and United (37) taking their derby grudge out on other teams, as well as a resurgent Arsenal (37) scoring freely on the road. 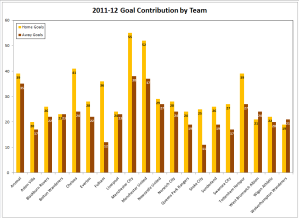 The Premier League timeline is split into different ‘eras’ distinguished by the changes to the number of league spots with ‘something to play for’. These refer to league positions which result in some large change that could serve as extra motivation for teams, i.e. Champions League or Relegation. (I haven’t included UEFA Cup/Europa League spots, maybe in the future)

In 2011-12 the Champions League participants have notched their second highest record with 322 goals (339 in 2009-10 is the record), while the Middle Leaguers doddered along managing to can a middling 610 anchovies. The Relegation teams have scored their highest tally of goals ever with 134…but it has not saved them from the drop.

Let’s look at the goal trends for the three groups over the Sky4 era.

Meanwhile on the other side of the table…the Relegation clubs don’t have a Home-Away trend as much as an Attacking-Defending trend. An increased ability to attack found itself paired with a growing inability to defend. Goals scored increased at home (+13 +23.6%) and away (+15 +34.7%), unfortunately goals conceded also increased all around: home (+31 +36.9%), away (+15 +14%). The heavy twin on the left of the attacking-defending seesaw needs to let the other one down.

The Middle Leaguers continue being, well, average. The only significant trend has been an increased tendency to entertain away supporters and make them like so many fuzzy, little kittens rapt with a fresh ball of yarn. Away goals are up by +16 (+6.6%) and away concessions (not pies) also increased by +29 (7.9%). The middle of the league continues to be boring otherwise. Studies are inconclusive as to the disproportionate effect that Stoke may have on these results.

And some derby comparisons just for fun. The charts below compare total league goals scored only for years when both clubs were in the EPL (ex. Manchester City was not in the league in 2001-02 so this season is not included).