The Premier League announced the successful completion of its sale of UK broadcast rights for the seasons 2016/17 to 2018/19. Sky Sports and BT Sport will continue on as the broadcasters of choice with Sky winning five of the seven available match packages for a price of £4.18 billion and BT taking the remaining two packages with a winning bid of £960 million.

The £5.136 billion sale is an increase of 70% over the £3.018 billion paid for the current broadcast package covering the seasons 2013/14 to 2015/16. The number of matches for sale also increased with the league offering 168 matches per season (504 total) compared to 154 matches annually (462 total) for the previous agreement. Per match price increased at a slower (but still spectacular really…) 56% growing to £10.2 million per match from £6.5 million in the previous period. 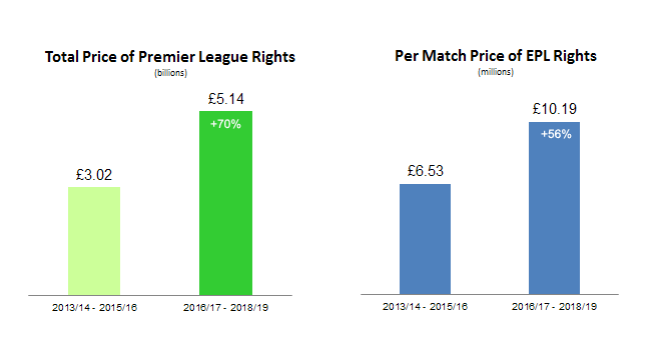 The growth of broadcast revenues in the Premier League has been astounding and represents the largest source of income for top division clubs. It will be interesting to see what effect the expectations of such significant revenue growth will have on transfer spending, ticket pricing and infrastructure investment.