Manchester United have announced a new kit partnership with soccer sportswear behemoth Adidas, ending their association with Nike. The new relationship will see United receive a staggering £75m (~$125m) annually, a sum that far eclipses the £23.5m per annum from the previous deal. In exchange Adidas will hold the exclusive right to distribute United branded products worldwide.

To put the economic impact of United’s new shirt deal into perspective consider that  Wigan Athletic’s gross revenues in the 2012/13 season were £58m. Manchester United’s shirt brings in considerably more money than an entire club playing (at the time) in the same tier. The figure is still stunning compared to the £126m in revenue made by an average EPL club. 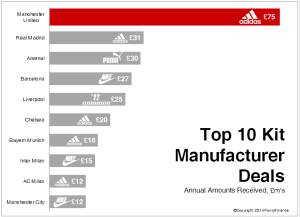 So how does the shirt deal stack up to other clubs with comparable branding?

The new kit more than doubles the next closest deal, Real Madrid’s  £31m a year kit (also Adidas). Arsenal’s newly minted Puma agreement hints at higher values to be had in the coming years but the gulf between United and the rest of the pack  speaks to the depth of the club’s support around the world.

The Adidas deal is the perfect capstone for a year in which United have demonstrated their commercial might, announcing numerous partnerships with companies around the world in product categories from snacks to diesel motors. With the club losing its place in the 2014/15 UEFA Champions League and the resulting TV revenues, the Devils’ sponsorship platform is a vital source of revenue growth that the club will rely on to strengthen a weakened squad and build what it hopes will be another golden generation.