No one will ever accuse Luis Suarez of being boring. The Liverpool striker and Uruguayan international has a fiery temper on the pitch which has oft landed him in trouble while in service of both his club and country. Most recently Suarez has found himself on the receiving end of a 10-match ban for biting Chelsea defender Branislav Ivanovic.

Opinions differ on what impact Suarez’s suspension will have on Liverpool, with some calling it an opportunity for reinvention and others seeing big negatives for the club. The ultimate effect remains to be seen, but for now we can take a look at the costs we do know about. To get an estimate of the cost of Suarez’s antics we can look at the games he has been unavailable for and measure them in terms of lost wages; or instances where Liverpool has paid for no option to use Suarez’s talent.

Let’s start by counting the games he has been banned for:

That is a total of 15 bans in the 90 league matches that Liverpool have played so far; 21 (currently) bans for the 242 league games he will play over the life of his contract. From his arrival in 2010-11 till the end of 2012-13 Suarez will have been unavailable for 17% (!) of Liverpool’s league matches. Now let’s estimate a cost in lost salary for each game.

Suarez’s bans to date have (counting forward to 2013-14) cost Liverpool ~2m in lost wages. This figure does not take into account cost of fines or any other related charges. And finally, to put this in perspective with some of the investment already spent on him: 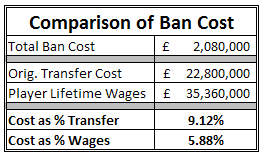 6% of the total wages Liverpool will pay Suarez over the course of his contract will be spent toward his bans. That percentage assumes that there will be no more incidents, something which seems unlikely given past history. Turns out there’s a pretty big price for mad genius.

3 thoughts on “The Hidden Costs of Luis Suarez”