UEFA is the busiest marketplace in the world for football players and the clubs of the English Premier League are the high rollers in the house. English clubs splash cash often and in large amounts. Here we will take a look at some of the data from the past twelve years of the league (1999-00 to 2011-12).

Total Player Movements have increased almost 100% over the period, increasing from 567 in 1999 to 1,041 in 2012. This number includes players involved in loans as well as straight transfers. The growth in transfer activity implies that more players, from more clubs are all moving more frequently. The trend of more volatile squad composition is likely to be well spread too as there is a limit to how many transfers a single club can (or should) contribute per season.

Nothing too surprising in the Departure and Arrival figures, moving on…

Revenue from players sold increased dramatically almost doubling from €242m to €422m and having three distinct periods. The three seasons between 1999-2002 were characterized by the a huge export of established talent overseas, the names are instantly recognizable: Anelka and McManaman to Real Madrid, Hasselbaink to Atletico, Overmars to Barcelona, Keane to Inter, and Stam to Lazio.

Revenue fell to the lowest of the entire period in 2002-03 (€132m) but then saw consistent year-over-year growth for the next seven years, peaking at €526m in 2008-09. Much of this was fueled by the growing dominance of the Sky4 and the arrival of Abramovich to Stamford Bridge. It was during this ‘middle’ period that we saw the considerable growth in player departures, starting with 348 and rising to 530 at the maximum.

More recently revenue has stalled for the past three years, falling dramatically from the 2nd highest year of 2009-10, fueled by the ‘Galatico’-size sale of Cristiano Ronaldo, to €422m in the 2011-12 season. Average revenue per transfer closely follows total transfer revenue, it most recently peaked at €1.02m in 2008-09 and fell to €835k in the most recent year. 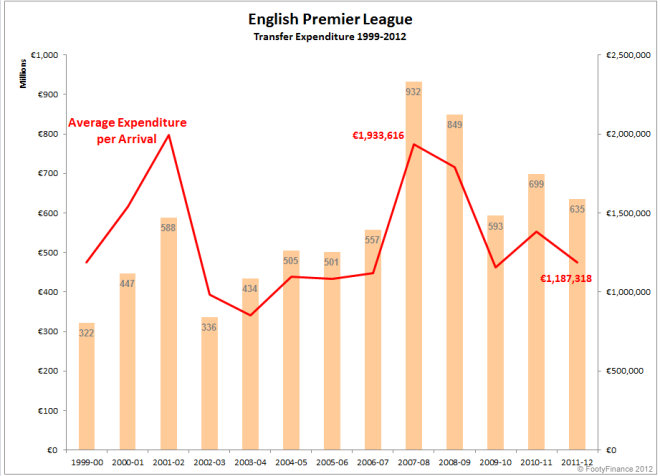 Expenditures on players have followed a pattern similar to revenue. From 1999-2002 there was substantial reinvestment of incoming revenues back into squads. This was followed by a pull back in activity during the 2002-03 season followed by steady growth, peaking in 2007-08 (€932m) with the high pricetag arrivals of the likes of Fernando Torres, Anderson, Darren Bent, and Nicolas Anelka fueling the pop. the lowest was €322m in 1999-00. In the most recent full year it was €635m, down 32% from the high of 932m.

Interestingly average expenditure per player has been on a downward trend since the 2007-08 season, declining from €1.93m to just under €1.2m in 2011-12. Perhaps an indicator that financial sense is slowly creeping into transfer policies? 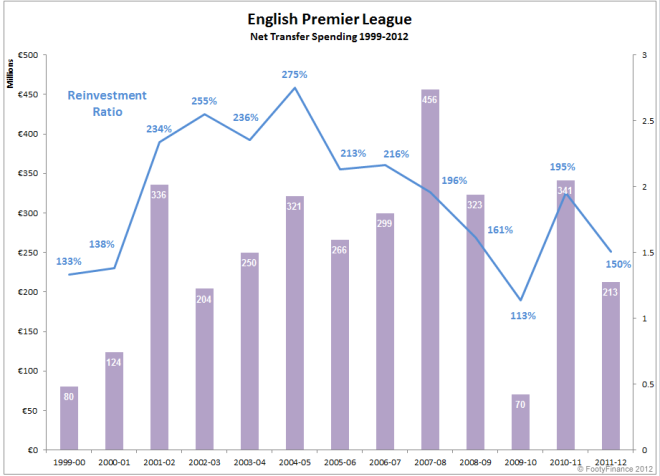 The reinvestment ratio (expenditure/revenue) has stayed consistently above 100%, only falling to a low of  113% in 2009-10 (again because of Ronaldo). The average reinvestment ratio for the period was 193.5%; meaning the Premier League has spent roughly double the amount it has made from selling players, every year for the past 13 years.

How does this stack up to other leagues? It is clear the the EPL outinvests Serie A and Ligue 1, but it looks roughly comparable to the Bundesliga and the Primera Division but it’s difficult to tell on the chart. The averages tell the true story: