Culture matters, in business and in sport.  The set of principles which guide the employees, managers and shareholders of a business are what produces results and culture plays a similar role at soccer clubs.  Both clubs and corporations are organizations focused on accomplishing a set of goals, it follows that there are parallels in organizational style.  Read on for the long lost corporate twins of your favorite clubs. 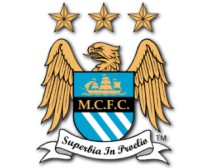 The ‘noisy neighbors’ of Manchester have planted the flag and they have done it in style. This season City has come out all guns blazing with their sights trained squarely on the club situated across Manchester. Nothing less than bragging rights for the next decade is up for grabs and the Citizens have shown they will mow down anyone in their way. So far this season they have notched 21 wins in 27 matches with attacking flourish and defensive industry supplied by the likes of David Silva, Sergio Aguero, Yaya Toure, and Vincent Kompany. Last year they shattered the Champions League status quo, this year they are clear favourites to break United’s grip on the domestic title. Money is the word used to dismiss their success, but there is something more going on at City than a spending high.

City’s rise is not unexpected, it is the result of steady, generous investment from owner Sheikh Mansour bin Zayed Al Nahyan of the United Arab Emirates. In his three years as owner Mansour has demonstrated an Abramovich-like determination to move the mountains of cash necessary to make City a world class club. Many clubs have been fed piles of cash, but the main difference at City appears to be a determined effort to create a sustainable franchise. This is reflected in the way Mansour has gone about addressing club infrastructure on every level: not only is there investment in top talent and improvement to the stadium and training ground, but also a commitment to creating a world class academy to secure and develop youth prospects. The message is clear: Manchester City is here and it intends to stick around. Many clubs underestimated the threat posed and the resulting chaos in the table has made for one of the most entertaining English seasons in a while.

So what other company can boast the same pattern of a industry disrupting rise, aggressive growth and a determination to dominate the future? Google (perhaps you’ve heard of it). When the search giant first popped onto the scene it was similarly overlooked by market leaders like Microsoft, Yahoo, AOL, much to their detriment. Google battled its way to the top on the strength of its search engine and left scores of competitors shattered by the wayside. While the company has been incredibly successful it has yet to reach the same level of dominance of previous industry giants; a situation Manchester City might sympathize with in its fight to rival the legacies of the big English clubs.

Greatness is sustained brilliance. Such a legacy requires constant adaptation and invention and no one knows this better than Google co-founds Sergey Brin and Larry Page. As CEO, Page’s greatest challenge is not just thinking up a few new products, but creating an structure that can imagine, develop and commercialize hundreds of new products for years to come. Like Manchester City, Google is throwing billions at creating a culture and infrastructure that will power the company for a generation. Their competitors (and neighbors) certainly hope that they are on the wrong track.

4 thoughts on “Which Company is Manchester City Most Like…?”