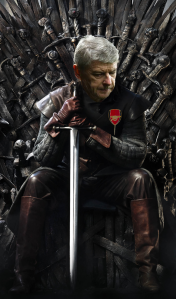 There are going to be Game of Thrones spoilers here, so move along if you don’t want to ruin your reading/watching experience.

George R. R. Martin’s A Song of Ice and Fire series has jumped in popularity over the past year as HBO adapted the first book, Game of Thrones, for the screen.  One of the pivotal characters in the first season is Eddard ‘Ned’ Stark, the Lord of the northern kingdom Winterfell.  Ned is a principled ruler, who respects tradition, duty and loyalty; these values compel him to answer King Robert’s call to serve as the Hand of the King.  The appointment requires him to move far to the south to King’s Landing, the capital of Westeros, a pit of intrigue and deception for which he is woefully unprepared.  Ned is unable to tell enemy from advisor and his unwillingness to participate in the web of back dealing and power plays seals his fate.  There is quite a bit of plot in between but to skip ahead by the end of the season Ned’s loyalty to the doomed King Robert and his principles costs him his head.

There is one Premier League manager who could do a convincing impression of Eddard Stark: Arsene Wenger.  If asked to name a manager who is guided by an overarching philosophy of soccer the obvious choice would be Wenger; his ethos of economic prudence, continental style and  resolute adherence to principle are well known.  Over the past 15 years Arsenal has been restructured with this ethos and character in mind and it can be seen throughout the club structure, from the playing style to youth development to transfer policy.  The end product is a system characterized by developing youth, selling talent at its peak and continuously improving the potential of the club.  The Stark motto “Winter is coming” would find no better home than on the gates of the Emirates for it is a creed which reflects a focus on the future rather than the needs of the present.  By now Arsenal have been able to complete the development cycle many times and to great profit, the problem is that the saving mentality may not work anymore.

When conditions change you must change.  Ned Stark’s main weakness is his inability to adapt to changing conditions despite recognizing the dangers surrounding him.  In this way Ned is not a sheep led to slaughter but a reckless bull charging to his death and this summer Wenger has demonstrated similar faults.  Arsenal’s development cycle is predicated on European soccer, but the emergence of nouveau riche Manchester City and a recharged Liverpool has upset the traditional order.  It is now five ships fighting for the four berths of the Champions League and Arsenal’s boat look to be taking on water.  Losing the income and allure of steady European competition would be disastrous as Arsenal would be hard pressed to sustain their cycle of youth development without it.  With the squad reeling from losses of key personnel, Wenger must be pragmatic and violate his principle of not competing for established talent.  Stubborness can be an asset in battles, but in a war it means defeat.

This is not to discount past successes or the overall prudence of the system, indeed the growing presence of  the Financial Fair Play regulations may eventually vindicate Wenger’s decisions.  He has all but publicly stated that he is counting on the Financial Fair Play blizzard to brush back the big spenders while Arsenal weather the storm.  There is always a case to be made for acting according to principles and eschewing the darkness of cynical action, but in the world of soccer, as in Westeros, the righteous are not always rewarded.  Arsene maybe correct that “Winter is coming”, but the question is whether it will arrive soon enough to save him should Arsenal falter.