While writing about the silly money spent in the transfer market I have, on several occasions, come across the surprising statistic that the Turkish Super Lig has been one of the largest spenders in recent history.  In five of the past six years the Super Lig has been one of the top five spenders in the world, at times trailing close behind giants like the Premier League and La Liga.  So what has been driving the league’s shopping spree?  Are  billionaire sugar daddies doing for Turkish football what Roman Abramovich and Sheikh Mansour have done for the Premier League?  Or is there more organic growth going on?

Over the past six years the Super Lig has a cumulative net spend of €210m euros, €202m of which is accounted for by three clubs, Fenerbahce, Besiktas and Galatasaray.  The three have been aggressively investing  in experienced foreign talent to bolster their squads, and have been successful in raising the league’s profile with the signing of well known players like Roberto Carlos and Blumer Elano.

Of the three clubs Fenerbahce has the highest average spend per year at an average of 16.4m per year, Besiktas and Galatasaray spend an average of 10.8 and 6.6 a year respectively. 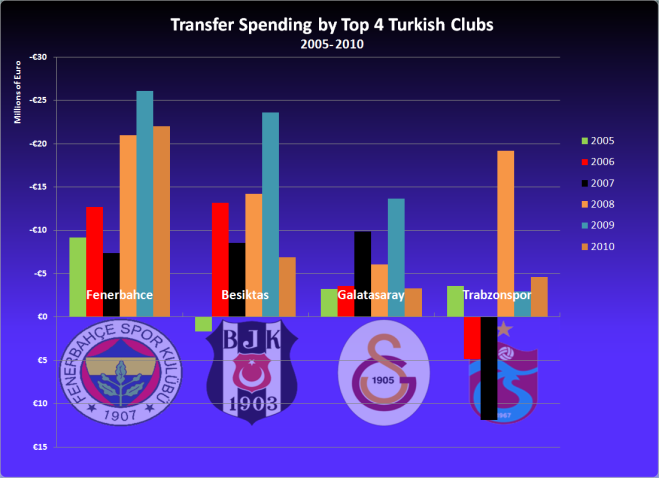 The growth of Turkish transfer activity appears to be largely organic.  It is no accident that the big spenders are perennial participants in the UEFA Champions League and that spending levels are roughly in line with the income that would be received from the competition.  Although an influx of deep pocketed owners remains a possibility, it seems unlikely given the lack of out-sized spending or big press.  The Super Lig is yet more proof that entry to the Champions League remains the most important goal for a football club to achieve.

2 thoughts on “Who Bankrolls the Turkish Super Lig?”