All has been quiet on the transfers front for the Premier League this summer.  There have been relatively few transfers this year with many clubs strapped for cash, and few of those that have occurred are the big-cash, big-name signings of previous years.  The impetus for the sudden tightening of purse strings was the financial implosion of 2007 in which United Kingdom and Euro banks, infected by the American market crises, found themselves drowning in poor credit and desperately scraping for cash.  That tightening of credit cascaded through all industries, including the Premier League and its ramifications still echo today.

The financial crash is clearly reflected in the steady decline of transfer spending post 2007.  Click to see the graphic in higher resolution. 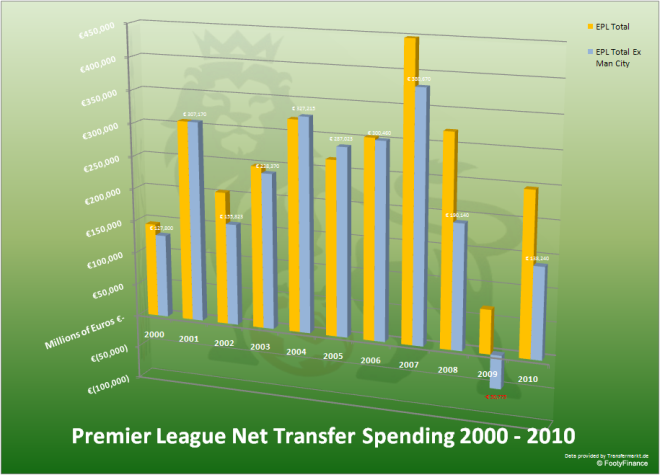 Despite statements to the contrary Premier League managers are clearly feeling pressure from owners to keep teams lean even three years after the crash.   Except of course managers named Mancini, but Man City is the exception for now.  Clubs are beginning to crack, even the “Sky 4” are not immune, Chelsea owner Roman Abramovich’s pockets do not seem so deep anymore, Liverpool has an early October deadline to secure new financing or theoretically risk insolvency, and even mighty Manchester United is slowly sinking under its growing debt burden.  Reining in spending was inevitable, the financial meltdown only hastened the return to reality.

The decline in spending is significant, but has to be kept in context.  Although transfer activity may be 44% off its peak the Premier League still outspent the next closest league, the Turkish Super Lig* of all places, by a factor of almost five to one.  So while there is less exciting, world-class talent coming into the league compared to previous years, it is still more talent than anywhere else.

Next time. Lower Transfer Spending: Decline or Renewal of the Premier League

*This is the second year in a row that the Super Lig has been a Top 5 net spender.  What exactly is going on in Turkish Football???

One thought on “Premier League Battered by the Financial Storm”